The red Tocai and suave Soave

The influence of Tokaj on the wine world spreads far and wide and its noble moniker has been used to name wines from Alsace to Australia. It was fascinating to find that even a red wine was named Tocai Rosso in the Colli Berici wine region in Italy’s Veneto, until quite recently. Renamed as Tai Rosso in 2007 due to the Hungarian region winning the right to hold the exclusive use of the name, the grape is actually genetically identical to the Grenache Noir of France.

Grenache arrived from France thanks to Vicenza’s support of Avignon’s Popes in the papal schism in the 14th and 15th centuries, yet Tai Rosso has developed its own set of local characteristics like firmer tannins and acidity, as well as forming larger berries. Colli Berici DOC lies in the hills between Vicenza and Verona and the vineyards reach up to 300-400 metres above sea level and it is warmer than the rest of the Veneto and favourable for red wine production. Colli Berici’s soils are split between limestone/red clay and basalt, with the former favouring red wine and the latter white.

Tai Rosso is the centrepiece of Colli Berici, which has been a DOC since 1973, yet is barely known by the wider wine world, but the Tai Rosso grape, in its various shapes and forms, is well worth getting to know. Tai Rosso makes everything from sparkling wine, either via the Charmat or traditional method, to a deep-coloured rosé, to both unoaked and oaked reds. At the Dal Maso winery, Montemitorio is unoaked, which enables the grape’s abundant red fruit and spiciness to come to the fore, as well as a distinctive note of rose hip. Excellent value for €7 from the winery. It contrasts with the more expensive (€15) and indeed more complex Colpizzarda, which goes into French barriques for 16 months. Despite the high quality of Colpizzarda, I could feel more of the actual presence of Tai Rosso in the cheaper wine.

Nearby, a walk around Cavazza’s Tenuta Cicogna, reveals the red clay soils in all their glory, while chunks of limestone pop up intermitantly. Here, the Rocca Pisana villa is a great place to stay and experience agriturismo at its best with a stunning view of the Apennines, while sipping on the classy wines, such as the old-vine Gambellara Classico.

Descending the path following the stream down to the Pegoraro Estate, which is tucked away in the hills of Messano in the south-east of Colli Berici, is like being transported to Middle Earth, with water mills a plenty. The winery is actually housed in a former convent that served as holiday hangout for nuns. From here, the Pegoraro Brut Rosé is a good example of vibrant and refreshing Tai Rosso made in the Charmat method, and the whole range impressive. Over in Toara, which in fact means ‘good earth’, you can actually stay in a mill at the Piovene Porto Godi family winery, another source of high quality Tai Rosso, as well as olive oil.

Another exciting take-away from Colli Berici is the sparkler Durella, a viable and less opulently aromatic alternative to Prosecco, which possesses good weight on the palate. Then, there’s the complex Carménère of the Inama winery (also a top Soave producer), led by the pioneering Stefano Inama, who shook up the Soave Classico establishment in 1991 with his Vulcaia Fumé, made from Sauvignon Blanc.

The sophisticated side of Soave
No wonder pergola-trained vines are popular in Soave Classico DOCG. As we climbed up high to get a panoramic view of the stunning and steep vineyards, the skies darkened and an almighty hailstorm ensued. Pergola must be cultivated by hand but the extra effort appeared to be worth it as the grapes survived the huge hailstones intact thank to the considerable canopy cover, much to everyone’s relief. While pergola had largely been replaced by Guyot (which still dominates the flat lands of Soave DOC) in the 1980s to enable mechanisation of the vineyards, many growers now favour traditional pergola as they feel it gives better protection against the effects of climate change and intense sun, in particular. Some growers use a mix of the two, however.

Most of the prime Soave terroir lies in the volcanic basalt and limestone soil of the Classico DOCG zone, in the hills that surround the atmospheric medieval town of Soave, whose castle was first built in the 10th century to protect the area against those marauding Magyars! Garganega is the main grape but Soave often benefits from a few per cent of Trebbiano di Soave, which serves to bring more weight to the wine. Trebbiano is making a comeback after Chardonnay pushed it aside in the 1980s thanks to its ability to produce higher yields and its compatibility with Guyot. However, the secret of good Soave very much appears to be in low yields.

Soave is the densest planted region in Europe. It has some 180 wineries and 300 grape growers. Soave lies on the Castelvero fault line and 60 million years a series of volcanic eruptions also saw the sea level rise – hence the combination of volcanic and seashell derived limestone soils. 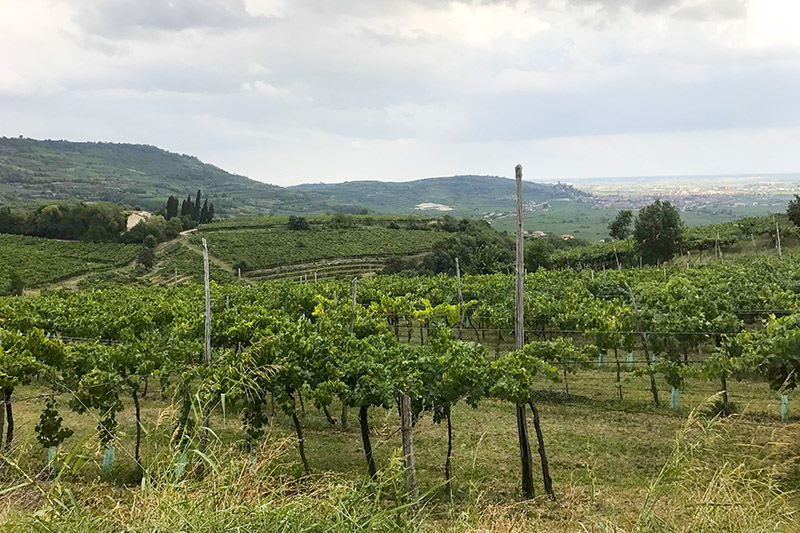 Coffele Viticoltori is one of the four wineries located within the city’s medieval walls and makes exciting wines to match the exquisite spot. It is still run by the charming 73-year-old Giuseppe Coffele, who calls Soave “the white wine of Italy”. Coffele makes both a varietally pure Garganega, labelled as Cerino, as well as blending Garganega with Trebbiano, and also has an oaked Garganega called Alzari. Despite the old charm of the setting, modern technology is very much in evidence at Coffele, as seen in the way that the sweet Recioto (called Le Sponde) is made from bunches of Garganega grapes that are hung up to dry in a room with computerised temperature control.

No oak whatsoever is used at Cantina del Castello, which actually has a secret passage that leads up to the castle. Tasting in its recently refurbished tasting cellar is like stepping back, or rather down, into the Middle Ages. It is owned by Arturo Stocchetti, who is also president of the Soave Consorzio. His daughter Giulia plays an important role in the winery and she explains that the family doesn’t want oak to block out the fruit and the terroir. The Soave DOC Classico Carniga 2014 was rich and concentrated despite having had no ageing in oak, with 12 months of ageing on the lees ramping up the texture. Here the Recioto was sparkling!

The Gini family has been making wine in Soave since the 17th century but started bottling wine in the early 1980s, being one of the first, and is also a pioneer in organic winemaking in the region. Most of Gini’s Garganega vines are 60 years old but the family has almost eight hectares of pre-phylloxera Garganega, which has been protected from the devestating louse by the volcanic soils. The Soave Classico and Cru wines were pristinely pure and elegant, which was also the case with the Grand Cuvée Brut Millesimato 2008 Metodo Classico Tradizionale 2008, a blend of Garganega, Chardonnay and Pinot Nero (Pinot Noir), aged for six years in the bottle for the secondary fermentation. Five of Gini’s 55 hectares are of Pino Nero, which is planted at altitude and the resulting wine was classy and not cooked.

Out in the western part of Soave where the soils are more limestone-based and very close to Valpolicella where he also has vineyards, Vicentini Agostino provided firm evidence that excellent wine can be made in the Soave DOC zone. His Terre Lunghe Soave DOC 2016, a blend of Garganega and Trebbiano di Soave, served to wake our palates up with the kind of pronounced acidity often associated with limestone. It gave the wine impressive structure, but thankfully it wasn’t only about the acidity thanks to some citrusy, floral, herbal and nutty notes.

Monte Tondo is another star of Soave that also has vineyards in Valpolicella. Dal Cero also not only makes wine in both Soave and Valpolicella, but also in Tuscany. Dal Cero’s Soave is made in a bold and concentrated style, which obviously appeals to foreign palates – a massive 75% of production is exported. Meanwhile, Borgo Rocca Sveva – Cantina di Soave, is Italy’s largest cooperative runs an spotlessly clean and quality oriented operation.

Join WineSofa people who get
free and fresh content delivered
automatically each time we publish.